NASA has recently shown lots of enthusiasm to build homes on the planet MARS. Yes, you heard it right. For the astronauts who visit MARS for various exploration activities, NASA is planning to create buildings there. And this seems possible with the implementation of the 3D Printing technology in the construction activities. Thousands of 3D Printed designs are being encouraged by NASA which will prove elemental in this endeavor.
This passion towards building homes in the red planet was observed when NASA along with its partners has held a competition named as the 3D –Printed Habitat Challenge. This challenge is initiated with an aim to build a 3D-printed environment for various space expedition activities. The total amount of this competition is around $3.15 million and consists of various phases. This challenge is structured to make use of developed construction technologies in an attempt to generate a sustainable way of living for the planet Earth and others.
The 1st phase of this challenge was held on 27th September 2015. This part of the competition consisted of a $50,000 design challenge. Various participants were invited to generate state-of-the-art techniques and methods related to the architectural designs that can be developed with 3D-Printing technology. The prize amount was distributed at the World Maker Faire, New York, in 2015.

2nd Phase which can also be termed as the structural modeling phase focuses on the importance of implementing the technology for generating various structural components. The need for recyclable materials for both terrestrial space houses was clearly reflected in this phase of the challenge. This was completed in August 2017 and the prize money offered was $1.1 million. Not only for creating a structurally viable habitat, the teams were expected to engage in enhancing the basic 3D Printing technology to produce the printers and construction materials. These competitors also had to 3D print various beams, cylinders, and other dome structures that were properly analyzed following which the selection process was determined.
The third phase is currently in progress and is subdivided into five different levels. This phase is a type of on-site habitat challenge and expects the competitors to develop these habitats using various recyclable materials. It consists of five levels, three construction levels, and two virtual levels. In the construction level, the teams are challenged to 3D-Print the features of the environment with at least one-third of the habitat 3D-Printed for the ultimate level. In the virtual phase, the contestants are demanded to digitally represent the features of a house on the red planet on the Building Information Modeling, or BIM software. The prize money included in this is of $2 million. The habitat thus generated by using the designs must be occupying 1,000 square feet of living area for at least four astronauts for almost a year. It should also include amenities for the life support system, mechanical and electrical system, spacesuit, various rover incubators, and plumbing facilities. The contestants were also advised to generate solutions that will effectively address the transportation issues associated with materials when there are items delivered from Earth to Mars. They were also advised to measure the atmospheric variations and the landscape altercations on the red planet.
The participants were from diverse sectors. Along with professional design organizations, NASA has also received registrations from various universities, business schools, and colleges in the United States. Also, the high school, university, and business teams who are unable to get their hands on 3D Printers can also be a part of this competition as they have the facility to team up with the ones in possession of the 3D Printers.
NASA selected the leading five teams among the 18 groups who were from all over the world. Based on a point structure, a $100,000 prize will be shared by these top five teams. 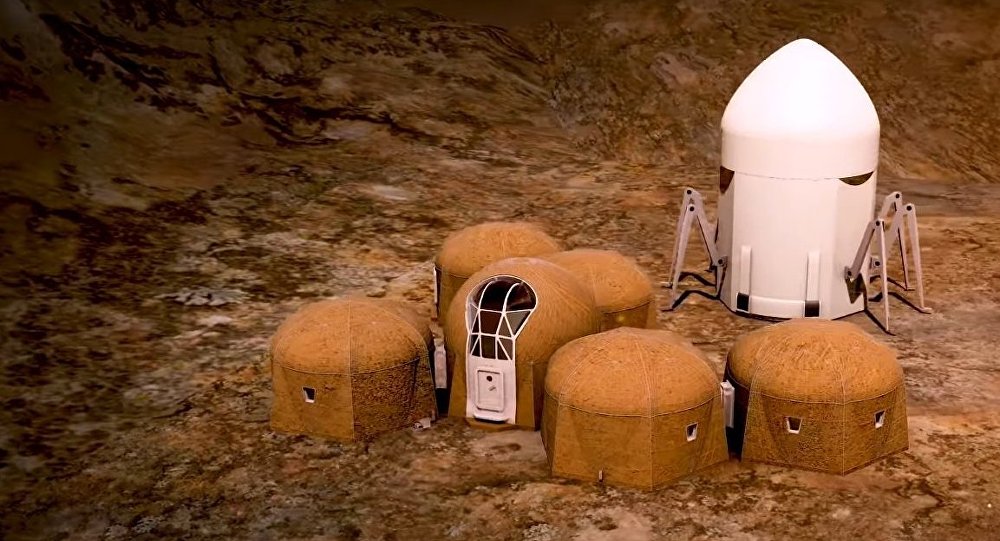 Team Zopherus ranked first in this competition. This Arkansas based team created a modular environment for human settlement on Mars. This habitat was 3D printed with the absence of any human indulgence and from the materials derived from the Martian surface. In this team’s concept, a landing object will meticulously examine its environment thereby select an ideal print space. Simultaneously, this object will spread out various autonomous robots to collect the required materials for 3D Printing. This landing vessel clings to the ground area which generates a secured and pressurized surrounding for the printing process. It then infuses the necessary materials and gets engaged in 3D Printing the hexagonal design. In fact, due to this particular hexagonal structure, numerous Zopherus habitats can be printed to be positioned nearby, thus building up an effective community. These structures are built with an excellent composite material of Martian concrete. This material is consists of ice, calcium oxide, and a heap of Martian surface material. These are gathered up by the available rovers and distributed to the landing object for the amalgamation. At the balustrade level of the individual habitats, there is a huge window which helps you get extensive sight of the Martian surface. This window also facilitates the light to nourish a garden to support vegetation and to generate oxygen.

In the second place, AI SpaceFactory showed up. They exhibited a steep structure shaped in the form of an egg. It is constructed by inhibiting double shell system to accord with the pressure in the innate atmosphere and with the structural strains that are active on Mars. This Marsha design is created utilizing the materials gathered from the Martian surrounding, just like the Zopherus habitat. This highly replaces the need for rockets for transferring materials from our planet Earth. This team came up with an ingenious blend of basalt fiber which is derived from the rocks of Mars and polylactic acid obtained from plants which are also a sustainable bioplastic. These will be raised on Mars surface. It varies from the Zopherus habitats as in this Marsha environments exist as distinct structures.

Similarly, talking about the third place, it was captured by Kahn-Yates. They built habitats in a specific amount. These were shaped in slick oblong structures which are designed to reduce the effect of any inherent dust storms. When this module reaches the surface of Mars, its exterior covering would crack while it lands, thus unfolding a pre-designed core. As a next step, a five-axis arm engaged in the printing process would be implemented from the starting of the core and simultaneously print a base surface using the Martian materials. This arm prints a concrete covering afterward. The secondary nozzle is simultaneously engaged in printing high-density polyethylene or HDPE layers on both sides of the shell. This, in turn, efficiently places the Martian concrete in the intermediate area. By reducing the sections of the concrete layer in the middle in the construction of the exterior shell, HDPE layers will only be visible on the surface, thus allowing the daylight to enter into the surrounding. This will help in doing gardening and generating food.
Recently, NASA has condoned designs created by AI Space Factory, for designing a 3D Printed house for the Mars atmosphere. Named as Marsha project, this is similar to a beehive structure. The vertical structures were a part of the 3D Printed Habitat challenge conducted by NASA where AI SpaceFactory ranked second. Each of these hives has the capacity to accommodate four astronauts and is created from the basalt fiber as mentioned above. The cylindrical structures consist of an outer surface which is connected to the planet’s surface and an internal structure consisting of living areas. These constitute four levels wherein the wet lab is located on the lowest level, the kitchen and dry lab above it, and the two levels on the top are meant for relaxation purposes. Bedrooms are in the form of semi-confined pods for sleeping purposes that also provide personal space. Also, the water-filled caps present in the skylights refine the light in accordance with the building’s height.


Thus, we can clearly observe that the primary goal of the “3D-Printed Habitat Challenge” conducted by NASA is to understand and simultaneously implement the ability of automated construction machines in building houses in a different planet with the help of 3D Printing technology. The attempts taken by various organizations to materialize this concept is noticed worthy and can offer the society a lot for habitation purposes. Apis Cor has been engaged in creating solutions to print numerous horizontal structures and the building materials. They have one of the competitive requirements. Since they have already 3D printed a house in Russia, they are eyeing to plunge ahead in the construction processes using the 3D Printing technology. Apis Cor and Search+ have collaborated to produce a highly ambitious project. With Search+ in-depth knowledge about space design and architecture, effective habitability concepts can be generated in NASA’s 3D-Printed Habitat Challenge.
It is now a matter of time until all these concepts and designs related to the 3D-Printed houses being developed in Mars are a huge success. One of these attempts to witness these efforts towards making 3D Printed houses in Mars take shape was taken by Ramille Shah who is a material scientist at Illinois in the Northwestern University.

This team has come up with a process to mix the lunar and the dust from Martian surface with various solvents and biopolymers to generate various inks which are extraterrestrial in nature. These inks were afterward given different shapes using 3D Printing technology with the help of an extruder. These objects consisting of the maximum amount of dust were strong and flexible. This, in turn, made them capable of tolerating the rolling, cutting, and other processes necessary for generating 3D Prints of any shape. Thus, we can say that thousands of mindsets are concentrated on making the 3D printed houses for MARS take a concrete shape.

SpaceX CEO Elon Musk has also mentioned that initially astronauts will be living in domes before building a sustainable civilization on Mars. This Initiative by NASA is essential a key factor in the survival of the astronauts & other space tourists. SpaceX is fully focused on to the development of the BFR Aka “Big Falcon Rocket” which will enable Reusable interplanetary mission with orbital fuel refilling. This rocket is a key factor in determining whether humans can travel to mars & live. Elon Musk & SpaceX are pushing the boundaries to achieve this impossible dream of colonizing Mars  & Making life multiplanetary. Metal 3D Printing Helps them test their engines faster
With the increased population and the need for sustainable living conditions the technological advancements adapted by NASA for building houses using the 3D Printing Technology is praise-worthy. Creating habitats in other planets suitable for human settlements will reduce the pressure of limited living areas on Earth. These steps taken are also a reflection of how fast the 3D Printing technology has come in the construction activities. Further developments and technology advancements are surely going to be generated and it is not late when we will find habitats developing in MARS which are efficient for human settlement for longer periods.